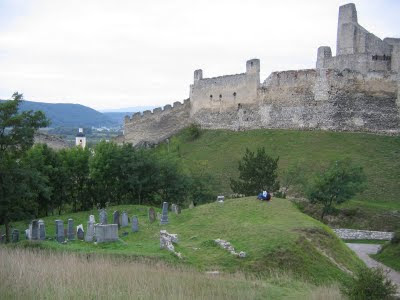 The web site is devised and operated by Maros Borsky, the leading expert on Jewish heritage in Slovakia. The author of the book Synagogue Architecture in Slovakia, Maros founded and directs the Slovak Jewish Heritage Center - one of 36 organizations featured this year in Compass, a new guide designed to introduce, inform and enlighten readers about what it sees as some of Europe’s "most vital, innovative, effective and sustainable Jewish organizations and programs."

Each month, a "site of the month" will be highlighted online -- sites in good condition but also neglected sites that need action to save them. The current "site of the month" is the wonderful synagogue building in Liptovsky Mikulas, a neo-classical structure that was rebuilt by the Budapest architect Lipot Baumhorn after fire damage in 1906. It was in bad shape when I first saw the building in 1990 or 1991; it was later partially restored. Just three years ago, it was being used as an exhibit hall and cultural venue. Today, however, the synagogue (which was restituted back to the Jewish community) has been closed, and it is impossible to visit.

The building, Maros writes on the web site:

embodies the tragedy of Jewish heritage in Slovakia. Although it is one of the most beautiful synagogues in Europe, there is no use for the building, and nobody is willing to come up with a solution for its survival. However, for the time being, it is still worth seeing – at least from the outside. 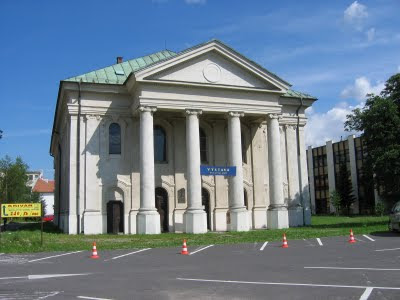 Our online resources provide information about major Jewish sites around the country. The material covers a range of topics and is oriented to scholars as well to the general public.

The MONUMENTS DATABASE features details on hundreds of Jewish heritage sites we have documented throughout Slovakia. We began our work in 2001 as Synagoga Slovaca, a project aimed at documenting the scores of synagogues, many of them in ruinous condition, that still stand in all corners of the country. We are gradually adding cemeteries, cemetery chapels, mikvaot (ritual baths), school buildings, other Jewish communal buildings and Holocaust memorials. Material in the database includes historical and architectural information as well as photographs.

The SLOVAK JEWISH HERITAGE ROUTE promotes the country's most important Jewish heritage sites and integrates them into national and local cultural, educational and tourism contexts. The Route is associated with the European Routes of Jewish Heritage, which has been declared a Major Cultural Route of the Council of Europe.

These projects and other activities of our Center are part of a long-term vision that includes the establishment of a sustainable and multi-faceted SLOVAK JEWISH HERITAGE PROGRAM. We strongly believe that our work can foster a desire - and a commitment - to seek sustainable frameworks for the maintenance and restoration of these important yet all-too-often neglected heritage sites. Only through such strategies can we contribute to the preservation of Slovak Jewish monuments as part of Slovakia's overall multicultural heritage.