The Hadassah-Brandeis Institute at Brandeis University  has issued its call for applications for the summer or fall 2014 Scholar in Residence program.

It's a wonderful opportunity -- I was the Scholar in Residence at the HBI in early 2011, when I worked on my Candlesticks on Stone project about the visual representation of women in Jewish tombstone art.

In addition to the creation of the project web site, I present a paper about my project, which has been posted online as part of the Donna Sudarsky Memorial Working Paper Series.

You can view my paper HERE -- unfortunately it does not include the pictures, but you can see those on the Candlesticks on Stone web site.


Here are the details about the Residency and call for applications.


The HBI Scholar-in-Residence programs provide scholars, artists, writers and communal professionals the opportunity to be in residence at Brandeis University while working on significant projects in the field of Jewish women’s and gender studies.

Scholars-in-Residence receive a monthly stipend and office space at the Brandeis University Women’s Studies Research Center. Applicants living outside the U.S. and those whose work has an international dimension are especially encouraged to apply.

Scholars are invited to apply for residency at the HBI to carry out significant research and artistic projects in the field of Jewish women’s and gender studies. Papers written while at the HBI are included in the Donna Sudarsky Memorial Working Paper Series.

Residencies range from one month to the full academic semester. Scholars may begin the residency in August but should note that not all members of the Brandeis community will be available until the start of the academic year in September.

Posted by Ruth at 12:43 PM No comments: Links to this post

How to mark the Kristallnacht anniversary? With glorious synagogues

This weekend marks the 75th anniversary of what we call Kristallnacht, the Night of the Broken Glass, the night of violent coordinated Nazi attacks against Jews, Jewish property, and Jewish places of worship which saw some 7,000 Jewish businesses trashed and more than 1,000 synagogues put to the torch all over Germany and German-occupied lands. Some 30,000 Jews were imprisoned and more than 90 were killed.

The destruction wrought on the night of November 9-10, 1938 foreshadowed the mass destruction of the Holocaust that followed a few years later.

To mark this anniversary, rather than dwell on the destruction, I thought I would focus on rebirth and survival, in particular the survival of synagogues whose restoration over the past two decades has been a symbol of Jewish rebirth in Germany and elsewhere in central and eastern Europe.

Here, then, just a few photographs of synagogues, still used by Jewish communities, that stand now as enduring monuments to the glory of what was destroyed -- and offer hope that the still somewhat fragile renewal of Jewish life in Europe may continue to strengthen. This is only a very small sample of the synagogue buildings that have been restored in Europe (most of them now used for cultural or other purposes).

And here are a couple of synagogues built in recent years. The use of glass is a real answer to Kristallnacht, no?:


Posted by Ruth at 3:04 PM No comments: Links to this post

Florence synagogue highlighted at Cafe Balagan this past summer 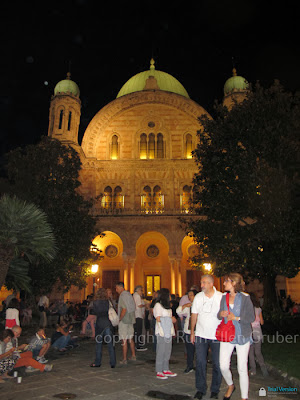 Almost every week last summer, from early June through the end of August, the palm-shaded garden of the Florence synagogue was the scene of "Cafe Balagan" -- a sort of mini-Jewish culture and food festival aimed at opening up the Jewish community to the city -- and encouraging the city to recognize and embrace its Jewish history.

I took part in the last edition, at the end of August, engaging in a public conversation about Jewish culture and mainstream society, with Enrico Fink, the musician (and director of cultural affairs for the Florence Jewish community) who devised the event.

I wrote about it all for The Forward, in an article published this past week:

If you look out over Florence from Piazzale Michelangelo, high above the Arno, two domes catch your eye. One is Filipo Brunelleschi’s masterpiece, the immense ribbed dome of the Duomo. The other, off to the right, is much smaller but in its way also distinctive: It is the tall, bright green copper dome of the Florence synagogue.

“Anyone who looks at the Florence skyline sees the Duomo and the synagogue,” said Enrico Fink, a musician and actor who last December took up the post of cultural affairs director of the Florence Jewish community.

Dedicated in 1882, the synagogue is a monument to 19th century Jewish emancipation and a grand example of Moorish style architecture, with a soaring arched façade and two slim side towers.

But while the Duomo is one of the most famous attractions in Italy, visited by millions, the synagogue and the Jewish history of the city remain largely unknown to most Florence residents as well as to the vast majority of tourists.

Fink and other recently installed leaders of the 800- to 900-member Jewish community want to change this. Breaking with past policy, they have embarked on a plan to actively engage with mainstream Florence. They endeavor to make the Jewish community more visible and accessible, demystifying Jews and Jewishness for local non-Jews, while putting Jewish heritage on the local tourist map.

“We want people in Florence to understand who we are, and to understand that the Jewish community belongs to the city, that we are part of the fabric of the city,” community president Sara Cividali, an energetic woman with a mass of silver hair, told me over lunch at Ruth’s, a kosher vegetarian restaurant next door to the synagogue. “It isn’t assimilation; it’s different, it’s participation,” she said.

This new strategy was launched this summer with the Balagan Café, an unprecedented experiment in outreach that turned the synagogue’s palm-shaded garden into a mini-Jewish culture festival almost every Thursday night from June through August. Balagan, more or less, means “chaos” — and, said Fink, the idea behind calling the summer’s experiment “Balagan” was “an acceptance of confusion that’s not easy to define.”

Each Café featured music, lectures, discussions, performances and other events. There were free guided tours of the synagogue and stands selling books, CDs, Judaica and Balagan Café T-shirts depicting a full moon over the synagogue dome. Performers and featured participants included nationally known figures such as the rock singer Raiz, the Tzadik label klezmer jazz clarinetist Gabriele Coen, and the architect Massimiliano Fuksas, who designed, among other things, the Peres Peace House in Israel.

Meanwhile, food stands sold kosher meals and kosher wine to crowds eager to sample couscous, baked eggplant, beans with cumin and harissa, spicy chickpeas, Roman-style sweet and sour zucchini and other specialties. One evening saw a “competition” between Sephardic and Ashkenazic cooking; another featured a lesson in challah-making.