Care to spend the night in the building that once housed one of pre-Holocaust Poland's most famous and influential yeshivas?

From October you'll be able to do so, when the four-star Hotel Ilan opens in the huge building in Lublin, Poland, that once housed the Yeshivat Chachmei Lublin, founded in 1930 by Rabbi Yehuda Meyer Shapiro.

According to the Hotel's web site and Facebook page, the new hotel will include 44 rooms, four suites, a restaurant called Olive that will feature Jewish cuisine, a lobby bar, a conference center and a spa/welness center. Its logo includes the slogan “feel the tradition.”

The building is owned by the Warsaw Jewish Community, which will run the hotel. (The community already runs a guest house, Beitenu, located in the former synagogue in Kazimierz Dolny.) That synagogue was used as a movie house after World War II and was restituted to Jewish ownership in 2002. The Beitenu complex  also includes a Jewish museum, Judaica and kosher shop, and a cafe.

The Yeshiva function in Lublin only until 1939. After World War II, the enormous building became part of the Lublin medical school. It was returned to Jewish ownership in 2004, and parts of it have been renovated to include a synagogue, mikvah and Jewish communal offices as well as exhibition space.

The full power point of the presentation about Romanian synagogues by Lucia Apostol, of the Federation of Romanian Jewish Communities (FEDROM), at the conference in Krakow in April on Managing Jewish Immovable Heritage, has been posted online on the Jewish Heritage Europe web site. (The full video of her talk is already online here.)

The presentation is a little tricky to read, as the power point slides had to be posted as a photo gallery — and the slides open one by one. But it’s worth it to see the pictures and get an idea of the overwhelming extent of the challenges.

As Lucia points out, while there have been some successful preservation/renovation projects, the challenges are enormous -- and funds are scarce.

FEDROM is responsible for 87 synagogues scattered in all parts of Romania, 34 of which are listed as historic monuments. Only 42 synagogues are still used for religious purposes. 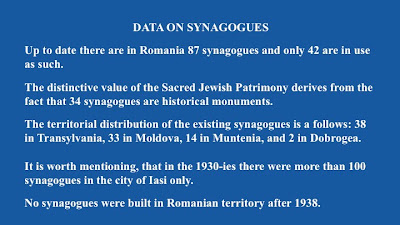 She focused in particular on one horror story -- the botched and stalled restoration of the 17th century synagogue in Iasi, in northern Romania, the oldest synagogue in the country and one of only two synagogue buildings standing in a town that once had more than 100.

Restoration of the building, funded only by the Ministry of Culture and Heritage, began in 2007 but was halted in 2009,  when Remicon Ltd, the construction company that had won the bid to carry out the work went bankrupt, leaving the building in a perilous condition, with its future uncertain.

In addition, Apostol noted that FEDROM is responsible for more than 800 Jewish cemeteries, 17 of which are listed as historic monuments -- and many of which have extraordinarily ornate carved decoration. 650 cemeteries are located in towns and villages where no Jews live. 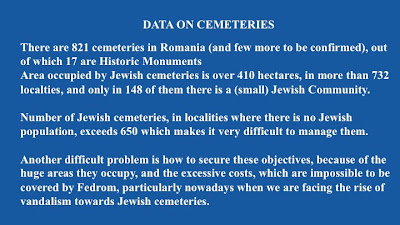