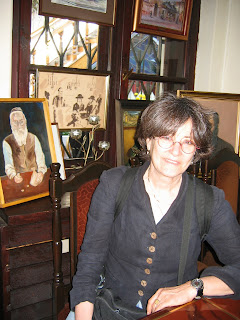 I've been invited to speak again at a symposium in July at the Yiddish Summer Weimar, an ambitious workshop/festival on Yiddish music and culture that takes place for about a month in Weimar, the Germany city more associated with Goethe, Schiller and a failed "Republic" than with East European Jewish traditions....

This year's Symposium July 12-14, and the Yiddish Summer as a whole, are dedicated to a project called "The Other Europeans" -- an intercultural dialogue exploring Yiddish and Roma music, culture and identity.

I'll be speaking about popular images of Jews and Yiddish culture in Europe, including stereotypes, cliches and kitsch. I'll discuss their inherent ambiguities in a world that straddles the Jewish and non-Jewish community and where stereotypes and shorthand often take the place of nuanced definitions.

As I noted in my last post, from LA -- boundaries between insider and outsider, believer and non-believer, devotee and ironic observer can sharply delineate the differences between kitsch and caricature, art and artifice, stereotype and homage. Perspectives shift, and the boundaries often blur; the images and their meaning are often decidedly in the eye of the beholder, and they are frequently dictated by changing religious realities, philo-Semitic, often engineered nostalgia, and the powerful exigencies of the marketplace.
Posted by Ruth at 11:47 AM No comments: 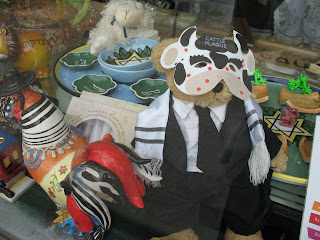 My exploration of Jewish tourism and Jewish kitsch usually centers on what I find in Europe, and in particular eastern and central Europe. In my book Virtually Jewish: Reinventing Jewish Culture in Europe and elsewhere I've written about the Jewish knickknacks and sometimes unsetting Jewish trinkets you can find in Krakow, Prague, Kiev and elsewhere -- mainly places where few Jews live and where the main market for such keepsakes and imagery is non-Jewish.

I've also written about "the ambiguities inherent in the popular visual representation of Jews in a world that straddles the Jewish and non-Jewish community and where stereotypes and shorthand often take the place of nuanced definitions. Boundaries between insider and outsider, believer and non-believer, devotee and ironic observer can sharply delineate the differences between kitsch and caricature, art and artifice, stereotype and homage. But perspectives shift, and the boundaries often blur. The images and their meaning are often decidedly in the eye of the beholder. And they are frequently dictated by changing religious realities, philo-Semitic, often engineered nostalgia, and the powerful exigencies of the marketplace. "

This all sprang vividly to mind today, the day before the eve of Passover, when I went with my father and brother to shop for Seder supplies in a Jewish neighborhood in Los Angeles. We went to the "Glatt Market" and a kosher fish store; Eilat Market and a seedy Kosher butcher shop with a broken screen door and miserable looking meat.

The nice man in the fish store (long black beard, thick black-framed glasses, large black head-cover) ground up the carp, pike and whitefish on the spot, and while he was doing so I took a few minutes to explore the Judaica shop just down the street. 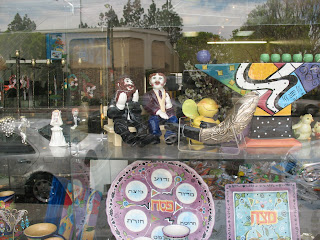 The shop was filled with an almost indescribable array of kitsch, much of which would be considered extreme even anti-semitic stereotype if found on sale elsewhere. I zeroed in on a couple of items. One, a ceramic salt and pepper shaker combo, one shaker a figure of a dancing Jewish man, the other his dancing wife, both dressed in shtetl attire. A number of other items including an elaborate Seder plate with figurines decorating bowls for the ritual items, were clearly made by the same hand (or, rather, manufacturer) -- in China.... the salt and pepper shakers cost $15, but -- just as I could not bring myself to buy cowboy boots made in China a couple years ago in Texas, I simply could not buy Judaica made in China.

Among the other items that caught my eye were wooden figurines of Jewish musicians obviously imported from Poland -- they were not only musicians, but they "shockled" or bobbed their heads and even legs. One small one was left, and two big ones. The proprietress of the store, a Persian-Israeli, said she had one client who routinely bought up all the small ones....
Posted by Ruth at 11:49 PM 1 comment:

Janusz Makuch, the director and co-founder of the annual Festival of Jewish Culture in Krakow, Poland, has been presented one of Poland's highest civilian awards, the Poland Restituta medal. Polish President Lech Kaczynski presented Makuch with the award at a ceremony in Warsaw marking the 65th anniversary of the wartime Warsaw Ghetto Uprising.

This year the Festival will take place June 28-July 6. The Preliminary Program is already online.
Posted by Ruth at 7:09 PM No comments:

Plans to build on Jewish cemetery in Ukraine halted

JTA runs a brief story stating that the US Embassy intervention helped halt plans to build two high rises on the site of the Jewish cemetery in Vinnitza, Ukraine. See the story HERE.

Most Jewish cemeteries in Ukraine are abandoned, and even those where there are Jewish communities are often very neglected. Many cemeteries have had their tombstones uprooted. The cemeteries in western Ukraine in particular are noted for the intricacy of their decorative carving. You can see some examples on my web site.

The most comprehensive list of Jewish cemeteries and other Jewish heritage sites in Ukraine is the downloadable survey overseen by the U.S. Commission for the Preservation of America's Heritage Abroad.
Posted by Ruth at 2:50 PM No comments:

Video Interview with me in Krakow about Jewish heritage

Last summer, at the Festival of Jewish Culture in Krakow, I was interviewed for a project on the Festival that has now become an informative web site. Put together by Zach Rait, and sponsored by, among others, the Taube Foundation, it features photographs and film clips of many aspects of the Festival, as well as interviews with me and others -- ranging from Festival director Janusz Makuch to the late Chris Schwarz, who founded the Galicia Jewish Museum and, sadly, died only about a month after last year's Festival took place.
Posted by Ruth at 2:18 PM 1 comment: