POLAND -- Shabbaton in Kielce: services in synagogue for the first time since WW2

A Shabbaton  will take place in the Polish city of Kielce next weekend (Oct. 16-17), bringing Shabbos observances to a synagogue that has not been used for worship since the Holocaust. A detailed web site (in English as well as Polish)  describes the program, the synagogue -- reconstructed out of recognition after World War II, and long used as the district archives -- and the history of Jewish life (and death) in the city.


On 16 October the Shabbaton will begin with common prayers at the three houses of worship built in Kielce in the early 20th century: the Catholic Church, the Synagogue, and the Orthodox Church. During an open meeting, the Polish Council of Christians and Jews will then discuss Catholic and Jewish identity.

On Friday evening a community Sabbath will be celebrated for the first time since World War II. Sabbath prayers will be said in the synagogue, which this year celebrates the 100th year since its founding and which is currently in use as the State Archive, followed by a traditional Sabbath dinner dinner.

On 17 October after morning prayers and lunch everyone is invited on a walk through Jewish Kielce. Guests from Israel will then lead workshops on Judaism. A Havdala service will mark the end of the sabbath, which will then be followed by an evening of dance and music.

Jews were barred from settling in Kielce until the early 19th century; by 1939, there was a Jewish population of about 25,000. The Nazis set up a ghetto in April 1941; many died from the brutal conditions, and about 20,000 people were deported to Treblinka.

Kielce, however, is far better known for what happened after World War II. It is is infamous as the site of the last pogrom in Poland, a massacre of 42 Jews by a Polish mob who attacked the Jewish community house on July 4, 1946. The pogrom is described in detail in the book Fear: Anti-Semitism in Poland after Auschwitz,  by Jan T. Gross. 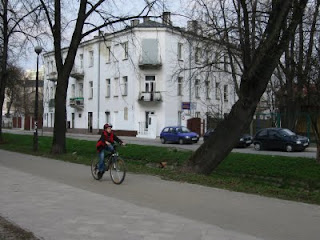 Monument to the pogrom, in Kielce, by American artist Jack Sal. (Photo from www.jacksal.com)

The Kielce Shabbaton is the latest in a series of Shabbaton programs in long-disused synagogues in Poland organized by Michael Traison, an America lawyer who has an office in Warsaw and has spent much of his time in Poland over the past 15 years. Previous Shabbatons have taken place in Pinczow, Piotrkow Trybunalski, Przemysl, and Lublin.

Traison -- whom I met in 1995 at ceremonies marking the 50th anniversary of the liberation of Auschwitz -- told me recently that he had four motivations for organizing the Shabbatons.


"First is remembrance, to remember these communities and these human beings that were here. Second is to demonstrate that the Jewish people did survive as a people and thrive and we are here, we are alive, and that we're here in Poland, too: Am Yisroel Chai. Third, to have an opportunity to bring Poles and Jews together, not just here but worldwide. And fourth, to provide a Jewish religious experience for people who would like to participate in such an experience and enjoy a good Shabbat."


(I'm also told that a Shabbaton will be held in late November in Plock, apparently organized by the Beit Warszawa reform congregation, but I don't have any details.)
Posted by Ruth at 11:06 AM