Big events in Poland next weekend 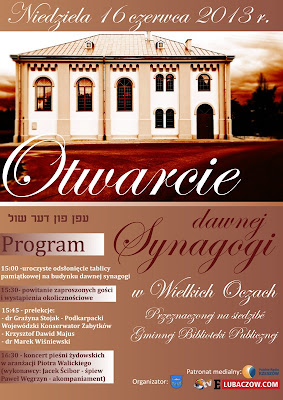 I've actually never seen the elegant synagogue in Wielkie Oczy, located in the southeastern corner of Poland on the Ukrainian border -- but I have long loved it from its photographs: its state of disrepair made it a particularly poignant image. Distinguished by its arched windows and doors, it was built in 1910 but rebuilt in 1927 after suffering serious damage in World War I. It was long used as a warehouse and office after World War II but had languished derelict for years in a steadily deteriorating condition.

A series of events  on June 16 will celebrate its reopening after a restoration funded by the town, with support from the Foundation for the Preservation of Jewish Heritage in Poland. These will include the unveiling of a memorial plaque to the destroyed Jewish community, speeches, and a concert.

The development of the Jewish museum in Chmielnik, north of Krakow, is something that I have followed for years -- and it all comes to fruition June 15-16, with two days of events including a conference, concerts, talks and more.

I first saw the ruined synagogue, one of the largest buildings in the little town, back in 1990, when I made my first forays into documenting Jewish heritage sites. Originally built in the 1630s, it was, though derelict, still a splendid building, a massive masonry structure with barrel vaulting. The Nazis turned it into a warehouse, but the interior still retained stucco work dating from the 18th century, and the walls still bore traces of delicate polychrome decoration, including frescoes of lions, neoclassical geometric forms, and signs of the zodiac.

About a dozen years ago, young local activists, in particular Piotr Krawczyk, became interested in the Jewish history of the town -- which Krawczyk noted to me actually meant the history of the town: before the Holocaust, Jews made up about 80 percent of the population, but their memory and the memory of their contribution was long suppressed or forgotten.

Inspired by the Jewish Culture Festival in Krakow, Krawczyk and other activists, cooperating with the municipality, launched an annual Jewish culture festival in Chmielnik, held each June. They also started other initiatives, including clean-up of the ravaged Jewish cemeteries and erection of the memorial, as well as a web site about Jewish heritage, history and culture of the region.

The museum project has been the most ambitious project, entailing the renovation and transformation of the synagogue -- the design has been somewhat controversial because of a glass bimah installation.

Belatedly.... links to the Jewish heritage conference in Krakow

I know, I've really let things slide on this blog. Partly it's because there has been so much going on that I have not found time to write a decent post. Partly it's because I've been putting a lot of energy into the news feed of the web site www.jewish-heritage-europe.eu, which I coordinate as a project of the Rothschild Foundation (Hanadiv) Europe.  I urge everyone to subscribe to the Jewish Heritage Europe news feed -- you can do it from the home page of the web site, or from any of the news pages. (And -- why not like us on Facebook and follow us on Twitter, too...?)

One of my main projects over the past few months, linked to Jewish Heritage Europe, was being the main hands-on organizer of the working seminar on Managing Jewish Immovable Heritage, which took place in Krakow April 23-25. Our partner on the ground in Krakow was the Jewish Community Center, whose young staff and volunteers were fantastic to work with and did an extraordinary job and making everything work....and everyone agreed that the kosher food provided from the JCC kitchen was the best anyone had ever had at such a gathering.

We had about 100 participants from about 20 or 22 countries -- as broad a mix of people involved in Jewish heritage preservation, documentation and promotion as possible: culture ministry representatives; Jewish community representatives; academics; architects and architectural historians; grass-roots activists -- and more.

All the sessions (except for a session with funders) were recorded -- and I have posted all of them, in their entirety -- on the web site. Click here to see them. I have also posted the texts or power points of some of the presentations.

There were three plenary sessions -- an introductory session with keynote by Samuel D. Gruber; a session on managing Jewish heritage in Poland; and a summing up "looking toward the future" session. All were held in the ornate, 19th century Tempel Synagogue, in mark to mark the 20th anniversary of the start of the restoration of that building.