More than 40 Jewish Culture, etc, festivals each year in Poland!

Readers of this blog know that each year since 2009 I have tried to put together a list of Jewish culture, music, film -- etc -- festivals that take place around Europe.

This year (so far) the list includes 40 or so, in more than a dozen countries.

My list is far from totally comprehensive -- I know I miss quite a few events. But I believe it is still probably the most complete list of such festivals Europe-wide.

Still, my list's incomplete-ness is borne out by a list of Jewish culture and other festivals in Poland, researched and complied by Agnieszka Gis, a young volunteer at the Krakow Jewish Community Center who this summer is working as an intern at the Taube Foundation in San Francisco.

Agnieszka's list includes more than 40 festivals, of all sorts. That's 40 Jewish culture, film, music and other such festivals in Poland alone -- a country whose Jewish community today numbers probably some 15,000 or so!

There are big festivals, such as the Jewish Culture Festival in Krakow and the Singer's Warsaw festival in Warsaw. But many are in small towns and even  far-flung villages. Most are organized by non-Jews and directed at a non-Jewish audience, perfect examples of what I have I described as the "virtually Jewish" phenomenon.

The August Jewish Heritage Europe Newsletter is Out!

The latest edition -- August -- of the Jewish Heritage Europe monthly Newsletter is out, and up online.

It features a selection of items that were posted on JHE's regular Newsfeed over the past month.

Top story is the series of "field notes" from the ambitious Shtetl Routes project, a Jewish heritage tourism project in Poland, Belarus and Ukraine that is under way with a more than $400,000 grant from the European Union.

Other stories range from the completed restoration of the synagogue in Tulcea, Romania to archaeology at Krakow's Old Synagogue.

It's easy to subscribe -- you'll get the Newsletter automatically in your email inbox.

Also subscribe to the regular Newsfeed for more frequent updates about what's happening in the Jewish heritage world.

Posted by Ruth at 3:17 PM No comments: Links to this post 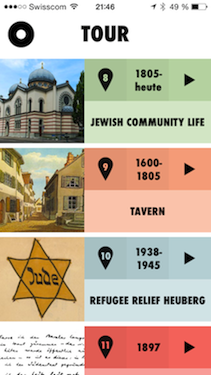 By Ruth Ellen Gruber
This also appears on my En Route blog for the LA Jewish Journal
Going to Basel, Switzerland and interested in Jewish life and heritage?
Then you'll want to get a new app for smartphones and tablets that is officially being launched on August 26.
Called "Baleph," the app is designed for both IOS and Android platforms and is in English and German.
It leads the user on a "stroll through Basel's Jewish history" via a 13-stop, multimedia walking tour that highlights Jewish history in the city from the middle ages to the present. Featuring  text, sound, and images, an Interactive timeline, and a city map with GPS function, it contains 65 minutes of audio material covering a tour lasting 1 ½ to 2 hours.
Here are the links:
iOS: https://itunes.apple.com/us/app/baleph/id895724718?mt=8&ign-mpt=uo%3D4
Android: https://play.google.com/store/apps/details?id=ch.merianstiftung.baleph&hl=en
Website: www.baleph.ch

Posted by Ruth at 3:06 PM No comments: Links to this post