Jewish Heritage Europe -- the web site that I coordinate -- has just launched a monthly newsletter! The first edition came this week and contains a description of the web site's features as well as highlights from our regular almost-daily news feed.

JHE is an expanding web portal to news, information and resources concerning Jewish monuments and heritage sites all over Europe. A project of the Rothschild Foundation (Hanadiv) Europe, we foster communication and information exchange regarding projects, initiatives and other developments: restoration, funding, projects, best-practices, advisory services and more.

Our newsfeed is updated almost daily, and by now, with well over 500 posts, it represents a major searchable database of information on the contemporary status of Jewish built heritage in Europe.

Posted by Ruth at 6:45 PM No comments: Links to this post

Balagan Cafe in Florence is Back for the Summer 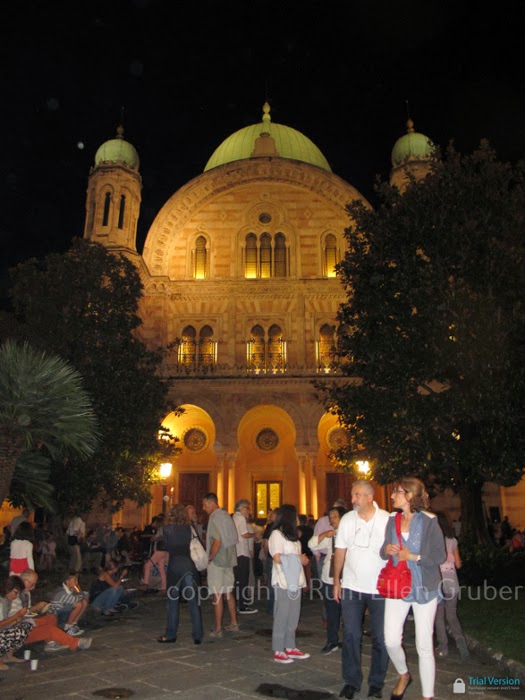 Going to Florence this summer? Well, Balagan Cafe is back -- the weekly open house/garden party on the tree-shaded grounds of the city's magnificent synagogue.

Just about every Thursday evening through August, the Jewish community invites the public for what they call an "apericena" -- a combination aperitivo drink and cena, or dinner -- with kosher food, wine and fancy cocktails.

In addition to the edibles and libations, each night programs concerts, talks, performances or other events, not to mention stands selling books, CDs and souvenirs.

The first edition of the Cafe was a big hit last summer -- with hundreds of people attending each week. They included members of the Jewish community but also many members of the mainstream public.

As I wrote last November in an article for The Forward:

Each Café featured music, lectures, discussions, performances and other events. There were free guided tours of the synagogue and stands selling books, CDs, Judaica and Balagan Café T-shirts depicting a full moon over the synagogue dome. Performers and featured participants included nationally known figures such as the rock singer Raiz, the Tzadik label klezmer jazz clarinetist Gabriele Coen, and the architect Massimiliano Fuksas, who designed, among other things, the Peres Peace House in Israel.
Meanwhile, food stands sold kosher meals and kosher wine to crowds eager to sample couscous, baked eggplant, beans with cumin and harissa, spicy chickpeas, Roman-style sweet and sour zucchini and other specialties. One evening saw a “competition” between Sephardic and Ashkenazic cooking; another featured a lesson in challah-making.
[...]
About 300 people turned up for the first Café in early June — most of them Jewish community members and their friends. But each week the numbers grew, thanks to enthusiastic local media coverage as well as word of mouth.
“It conquered the city,” journalist Fulvio Paloscia wrote in La Repubblica. By the summer’s last Café, on Aug. 29 — where I was featured in a public conversation ... about Jewish culture and mainstream society — the event drew 800 people. Crowds milled about the garden and listened to two concerts, one by a klezmer band and one by Sephardic singer Evelina Meghnagi. They also mobbed the food stand, where some 450 kosher meals were sold.

Posted by Ruth at 10:01 PM No comments: Links to this post