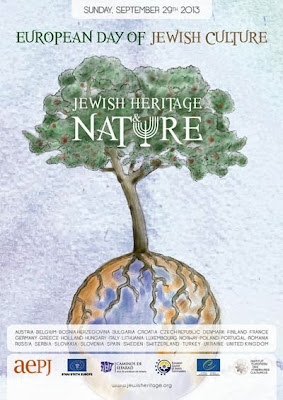 If you're in Europe today -- Sept. 29 -- chances are that there are Jewish cultural events going on for you to visit.

Today marks the annual European Day of Jewish Culture, a pan-Europe festival that this year, with hundreds of events taking place in two dozen countries. The Day usually takes place the first Sunday of September, but was move to the end of the month because of the timing of this year's High Holidays.

Many synagogues, Jewish cemeteries and other Jewish heritage sites are open, and there are concerts, exhibits, lectures, food and wine tastings, guided tours, and more.

Depending on financial support, volunteers, local organization and other factors, some countries boast a dizzying array of events -- in Italy, arguably the most enthusiastic participant in the Day, there are events in about 60 towns, cities and villages up and down the peninsula, with Italy's president taking part in kick-off ceremonies in Naples.

In other countries there may be a few events, or even just a token event or so. I'm in Poland just now and -- despite the wealth of Jewish cultural events that go on all over Poland throughout the year -- there are only a couple of events, in Krakow, listed in the Culture Day program.

The first full edition of the European Day of Jewish Culture took place in 2000. It grew out of a 1999 conference in Paris on managing Jewish heritage in Europe. One of the presentations there was on a local “open doors” to Jewish heritage initiative in the French region of Alsace begun in 1996 as a partnership between the local tourist authority and B’nai B’rith.

After the conference, meeting of experts and activists, which I attended, decided to expand this model on a European level.

The EDJC is loosely coordinated by the European Association for the Preservation and Promotion of Jewish Culture and Heritage (AEPJ), a body formed now by B’nai B’rith Europe, the Red de Juderias de Espana-Caminos de Sefarad, and the European Council of Jewish Communities.

Each year the Day has a theme -- this year's it's Jewish Heritage & Nature. The web site puts it: "This topic gives us food for thought – is there a link, and if yes what is it between these categories, what is the interaction between them? In order to find the answers to these questions it is necessary to look for arguments and examples and define a concept for the link between them."

This year's country participants include: