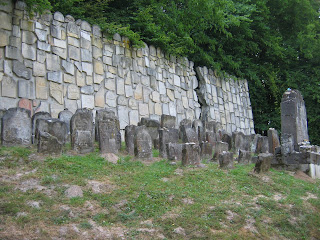 
The first national conference of (non-Jewish) Poles who care for Jewish heritage sites in Poland takes place next week -- Sept. 15-16 -- in the small town of Zdunska Wola, near Lodz in central Poland.

Supported by state and local authorities, the conference came about thanks to the local activist Kamila Klauzinska, one of scores of non-Jewish Polish volunteers who have been honored by the Israeli Embassy over the past decade for their work in preserving Jewish heritage in Poland. (Klauszinska is a graduate student in Jewish studies at Krakow's Jagiellonian University. You can email her at kamila.klauzinska@poczta.onet.pl.)

The conference is organized in association with the Yachad Historical Society, a group dedicated to the preservation of Zdunska Wola's Jewish history and heritage sites, and is dedicated to the memory of Ireneusz Slipek, who until his death in 2006 spent 20 years caring for and cleaning up the Jewish cemetery in his hometown, Warta.

The New York-based filmmaker, Menachem Daum -- director of the wonderful "Hiding and Seeking" -- told me that Slipek was "a former priest who single-handedly took care of the Jewish cemetery in his hometown of Warta.  He began his work in 1984 during the Communist regime and for many years had to overcome much opposition from local authorities and neighbors.  His surviving brother made available to me years of his home movies, videos and photos in which we see Ireneusz toiling to repair broken tombstones and literally sweating to return them to their original locations.  Kamila was inspired to undertake her own work by the example of Ireneusz who quietly worked on the cemetery every day, even on the day he died ... . Although he was never much appreciated during his lifetime, through her conference Kamila hopes Ireneusz’s example will inspire others just as he inspired her. "

The American lawyer Michael Traison (whom I met in 1995 at ceremonies marking the 50th anniversary of the liberation of Auschwitz) a decade ago instituted an annual ceremony to honor non-Jewish Poles who are involved in various projects related to the preservation of Jewish culture heritage in Poland. The awards are presented each year during the Festival of Jewish Culture in Krakow by the Israeli Ambassador to Poland. Scores of people, mostly volunteers and mostly from small, far-flung towns, have been honored for activities ranging from cleaning up Jewish cemeteries to running Jewish museums to carrying out school project on Jewish history and memory. 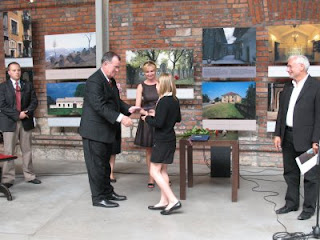 
As Yachad states, it is "a great honor for those who were awarded with diplomas. Some of them, for the first time, could feel that their work and devotion were noticed by such eminent people and institutions, although none of the volunteers did his work for diplomas, awards or ovation. Prof. Szewach Weiss (the former Israeli ambassador) called those who, on their own initiative, put a great effort in saving Jewish heritage – the third generation of the Righteous among the Nations. This is the greatest distinction that could be given to us, modest people from little towns. We would never dare to call ourselves this way. This title can be given only for the bravest, only for large-hearted men."

Organizers of the Zdunska Wola conference hope to hold such a conference every two years to connect people and enables them to exchanges experiences and information.

At next week's conference, local volunteers from various towns will describe their experiences. Various dignitaries are also expected to attend, including Chief Rabbi Michael Schudrich and government minister Ewa Junczyk-Ziomecka, an aide to the Polish president. Jan Jagielski, of the Jewish Historical Institute and one of the pioneers of documenting Jewish heritage sites in Poland, will give a talk on Jewish cemeteries.


PROGRAM of the CONFERENCE:

After the lecture volunteers from all Poland will present themselves:

1. Elżbieta Bartsch/Kamila Klauzińska - YACHAD
3. Paweł Turlejski - Minsk Mazowiecki
The end of presentations of individuals and associations
4. Prof. Aleks Bartnik
5. Albert Stankowski
6. Rabbinical Commission for the Jewish cemeteries
7. Summary, discussion and official ending of the conference
8. Opening of the exhibition MEMORY KEEPERS prepared by students from YACHAD - at 6 Sieradzka Street
9. Visit at the Jewish cemetery in Zdunska Wola
Posted by Ruth at 5:10 PM