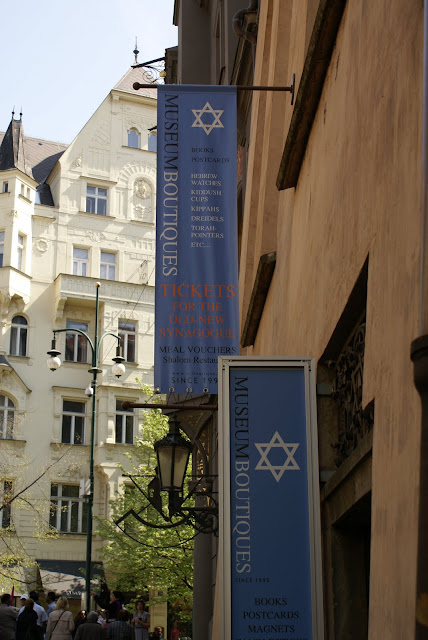 PRAGUE -- Lying between the Vltava River and the Old Town Square, Prague's medieval "Jewish Town," Josefov, is one of the most popular attractions in a magical "golden city" that draws millions of tourists a year. Here, amid historic synagogues, the Old Jewish Cemetery, the Jewish Town Hall and other major sights, is the Ground Zero of Jewish Prague: the stomping ground for heroes and villains and the evocative background setting for a host of old legends, not to mention the cradle of present-day Jewish life. Here, Jewish heritage and legacy are cultivated and exploited as an integral part of the ancient city. At peak season, tourists swarm through the district, making it sometimes difficult to navigate the cobbled streets, and souvenir hawkers sell everything from miniature golems to embroidered kippot.


I imagine the Jewish presence in Prague as a series of concentric circles centered on this medieval ghetto area and then expanding outward, like widening ripples of water, to the edge of the city and beyond. Physical sites, as well as Jewish memory and contemporary Jewish life, are concentrated in the innermost circle: there are a Jewish education center, kosher facilities and Jewish communal offices, and regular services take place in several venues. But there are many places of Jewish interest well away from the city center, too. These are much less visible and well off the beaten track of most visitors to the city, but they, too, form an integral part of the Jewish experience in Prague. The following itinerary will let you sample some of these outer circles of Jewish history and culture as well as the city's inner core.


Tourists aside, Prague's old Jewish quarter today bears very little resemblance to the dense welter of narrow alleys, tiny squares, dark passageways and crowded courtyards where generations of Jews were compelled to live from the Middle Ages to the mid-19th century, when the Habsburg monarchs granted them civil rights. After emancipation, many Jews moved out, and Jewish Town became a slum. An urban renewal project in the late 19th century swept away almost everything but a handful of synagogues and a few other historic sites, and the medieval ghetto was replaced by the handsome complex of buildings we see today. On the façade of the building at Maiselova 12, across from the Old-New Synagogue, you can see Jews symbolized by the star of David, money and stereotype profiles.

Jewish Town is still, though, where the city's main Jewish sights are concentrated. And if you can brave the crowds, you will see some of the finest and best preserved and presented Jewish heritage sites in Europe.
These include the 13th-century Old-New (or Alt-neu) Synagogue, the oldest synagogue in Europe still in use. Built about 1270, the compact Gothic building has a high peaked roof and distinctive brick gables. The twin-naved sanctuary features soaring Gothic vaulting and a central bimah enclosed by a late Gothic iron grille. Carvings of grape vines surround the Ark.

Across narrow Cervena alley is the High Synagogue, built in 1568, which, like the Old-New Synagogue, is today an active house of prayer and study. Right next door to the High Synagogue is the Jewish Town Hall (entrance at Maiselova 18), which still serves as the headquarters for Jewish community offices and activities. Built in the 1560s, the Jewish Town Hall is one of the landmarks of the Jewish quarter, with a distinctive tower and big clock with Hebrew letters, that seems to run backwards.

Prague's Jewish Museum occupies several historic synagogue buildings in the district. The museum was originally founded in 1906 to preserve items from the synagogues that were demolished in the urban renewal clearance of the old ghetto. Most of its collections, however, come from the more than 150 provincial Jewish communities in Bohemia and Moravia that were destroyed by the Nazis. The Nazis brought the loot to Prague, and even during World War II used the empty synagogues to exhibit precious relics of the people they sought to annihilate. The museum was run by the communist state after World War II, but it was returned to Jewish administration in 1994.

Vienna looms large in Jewish history and memory. The imperial Habsburg capital was the vibrant hub of a vast, multi-national Empire that stretched across Europe and encompassed a colorful and sometimes contentious mix of peoples, languages, religions and local cultures.

Jews lived here for centuries. Surviving pendulum-swing periods of tragedy and triumph, prosperity and persecution, they made key contributions to the cultural, economic and intellectual development of the city.
Nineteenth and early 20th century Vienna in particular was home to some of Europe's most influential artists, authors, musicians and thinkers -- from the writers Joseph Roth, Arthur Schnitzler and Stephan Zweig, to the composers Arnold Schoenberg and Gustav Mahler, to the father of psychoanalysis, Sigmund Freud. Vienna was also the cradle of some of the icons of popular culture: the filmmaker Billy Wilder grew up in the city, and the novelist Vicki Baum, the author of Grand Hotel and other best-sellers, was born here and wrote about her Viennese childhood in her memoirs. "To be a Jew is a destiny," she once said.

The Holocaust swept this world away. But monuments, museums and other vestiges of this long and creative Jewish presence can be found in many parts of the city.

What's more, Vienna is home, now, too, to a new flowering of Jewish life and creativity, both religious and secular. Vibrant schools, synagogues and other Jewish centers bear living witness to a remarkable Jewish rebirth in the decades since the Shoah. And Jewish writers, artists, musicians and filmmakers are putting their stamp on contemporary culture.

Visitors to Vienna can get a taste of both worlds. Most Jewish historical sites and monuments, as well as most active synagogues and Jewish centers, are located in central parts of the city, embedded in a historic urban setting that conjures up the grandeur of the past amid the contemporary bustle of modern-day life.
The following itinerary highlights some of the most important (and most easily visited) Jewish sights, but still, alas, gives only a brief taste of the richness of Jewish experience in the city.