Rabbi Edgar Gluck dances in the Tempel Synagogue after the close of Shabbos during the Jewish Culture Festival in Krakow. 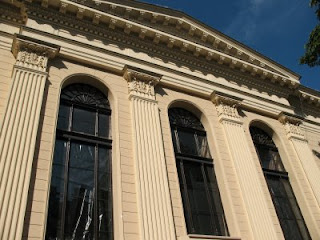 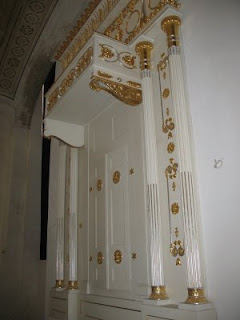 In Wroclaw, I visited the White Stork Synagogue. Renovations have been proceeding slowly.... but now the front facade as been restored, and the Aron ha Kodesh (ark) is also almost ready.

We attended a concert by the Norwegian Jewish singer Bente Kahan, who has settled in Wroclaw (thanks to her Polish husband) and in 2006 established a foundation to raise funds to restore the synagogue and also promote educational programs about Jewish heritage and culture and the Holocaust.

I spoke to Bente in her office, which is in the complex of buildings surrounding the synagogue, which also now houses the Lauder Jewish school, a hostel, a couple of cafes.

She told me that enough funding has been secured to enable the completion of the renovation of the synagogue by 2010. She's managed to do this by making her foundation a "neutral, non-profit organization" that, because of its neutrality, can navigate the sometimes treacherous waters between the municipality and the Jewish community.
Posted by Ruth at 2:58 PM No comments:

The Jewish Culture Festival in Krakow begins tonight...and I am heading there this afternoon from Wroclaw, where I took part in a fascinating conference on Modern Jewish Culture at Wroclaw University. Organized by the university's Jewish Studies Department and the Littman Library of Jewish Civilization, it grouped scholars from North America, Europe, Israel and Austria. Several speakers either quoted from or made mention of my book "Virtually Jewish" in their presentation, and it was gratifying and a little overwhelming to see what an impact the book seems to have had.

Coincidentally, or probably not coincidentally, an interview I conducted months ago with Wojtek and Malgosia Ornat, the Jewish tourism entrepreneurs in Krakow who run Klezmer Hois, ran today in the Forward. The Ornats also run the Austeria publishing house, which published "Letters from Europe (and Elsewhere)".
Posted by Ruth at 7:50 AM No comments:

Yet another synagogue in the Czech Republic has been restored and opened to the public. Jicin is northeast of Prague -- I saw the building was work was just beginning, in 2006. 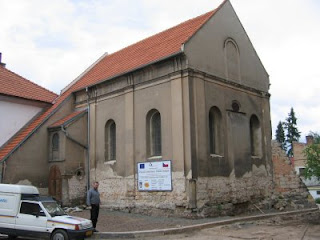 Following nearly eight years (2001-2008) the restoration of the
magnificent Baroque synagogue in Jičín, North Bohemia (Czech Republic)
is complete. The Prague Jewish Community will officially open the
building to the public on Thursday, June 19, 2008. The restoration
project is part of a continuing effort by the Czech Jewish Community
to reclaim, protect and preserver its historic, cultural and artistic
heritage.

A Jewish settlement is known to have existed in Jičín in the second
half of the 14th century, but Jews were expelled from the town in
1542-45 and again in 1557-63. The now-restored synagogue was erected
in 1773, more than a century after Jews are known to have been
readmitted to the town. According to Dr. Arno Pařík of the Prague
Jewish Museum, "this is an exceptionally pure example of a small, late
Baroque synagogue." It is a rectangular building, approximately 12.5
meters long and 8.2 meters wide, with a fairly high saddle roof over a
barrel-vault, supported on traverse arches and 90 cm. thick walls.
The sanctuary is well-lit by three tall arched windows on the south
and north walls. Smaller windows are set in the west (façade) and east
walls, the latter dominated by the well-preserved masonry Ark, flanked
by twisted columns. The vivid wall paintings – mostly in reds and
blues – have been restored to their 1840 appearance. Photos of the
restored building will be posted soon at www.isjm.org
The building is now one of best preserved late Baroque synagogues
remaining in Central Europe.

The restoration of the synagogue was supervised by engineer Mojmír
Malý at Matana a.s., Administration of Buildings and Cemeteries.
Heritage supervision is provided by the Zecher Foundation for the
Preservation of Jewish Monuments through Dr. Arno Pařík, and the
National Heritage Institute – specialist department in Pardubice.
Financing has been provided by the Jewish Community of Prague, the
Czech Ministry of Culture, the District Authority of Hradec Králové,
and the Municipal Government of Jičín. Financial support for the
synagogue renovation has also been provided by the Jewish Heritage
Program and World Monuments Fund.

A Torah scroll from Jicin is now in the possession of Temple Shir
Tikva in Wayland, Massachusetts (USA).

For more on the history and architecture of the building see Arno
Pařík, "History and Renovation of Jičín Synagogue," Judaica Bohemiae
(40/2004), 104-122.
Posted by Ruth at 11:09 PM No comments: 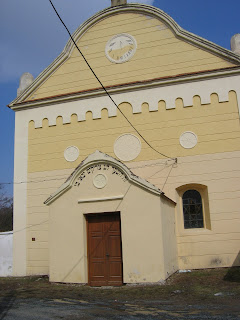 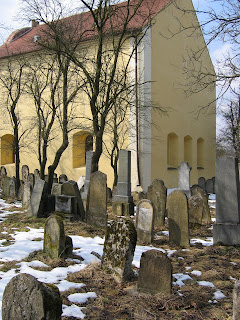 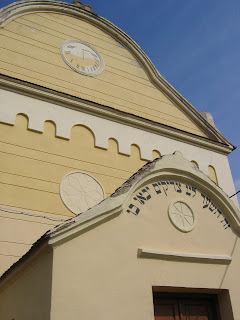 I was delighted to learn that the wonderful synagogue in the small town of Straznice, in southeast Czech Republic (southern Moravia) near the border with Slovakia, has been restored and will now be used as a local museum and cultural venue.

The synagogue was reopened with a festive ceremony June 5. It had been undergoing restoration work in fits and starts for acout 15 years. The synagogue is a barnlike building whose facade was enhanced by a sun dial. It stands amid ample remnants of the former Jewish quarter, with several other former Jewish buildings in the network of little streets. In an unusual arrangement, the synagogue is surrounded on three sides by the Jewish cemetery -- it always reminds me of a village church surrounded by a churchyard.

According the a Czech news agency report, the restoration cost 10 million Czech crowns (approx 16 crowns to one U.S. dollar).

When I visited Straznice in 2006, the outer walls had already been restored. Straznice is the latest in a series of restorations of Czech synagogues to be completed in recent years. The Czech Jewish community has developed (and implements) a clear strategy of preservation, conservation and restoration of Jewish heritage sites -- and this in turn falls within a general Czech strategy for monuments preservation.

Pictures here show the synagogue and surroundings in 2006.
Posted by Ruth at 12:12 AM No comments:

A part of the Jewish cemetery in Poznan has been rededicated. See the link
Posted by Ruth at 5:03 PM No comments: