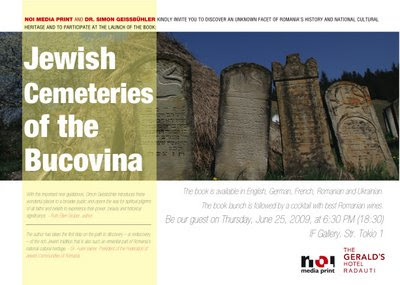 "Jewish Cemeteries of the Bucovina," a new guidebook-brochure to Jewish cemeteries in the Bucovina region of Romania (and Ukraine) is being published this month. It was written (and photographed) by Simon Geissbühler, a Swiss diplomat based in Bucharest and will be available in English, German, French, Romanian, and Ukrainian.

The official launch is June 25 in Bucharest -- see the inviation above -- but there will be another launch in Radauti, on June 29.

I contributed the Foreword to this guide -- the cemeteries in this region, with their sculptural, wonderfully carved, tombstones have long been among my favorite Jewish heritage sites (and not just because the region is where my paternal grandparents came from.) My project (Candle)sticks on Stone focuses on these carved stones, particularly house women are represented on them by depictions of candlesticks.

Needless to say, I'm delighted to see this book come out, and I hope it attracts attention to these wonderful but overlooked places, which are located in the same region as Romania's splendid, and much more famous (and visited) painted monasteries.

A hand reaches out, grasps the branch of a tree and breaks it sharply off. The image is extraordinary, even surreal; so vivid that you can almost hear the crack of the wood.

The tree is the Tree of Life and the hand is the hand of God -- or maybe that of the Angel of Death. The portrayal, found repeated over and over in the Jewish cemetery in Radauti, in the Bucovina region of northern Romania, is one of the remarkable sculpted images found on Jewish tombstones in scores of Jewish cemeteries scattered over this part of East-Central Europe.

I first visited Radauti more than 30 years ago, in the bitterly cold December of 1978. It is the town from which my grandparents emigrated to the United States, and it is here, in the Jewish cemetery, that my great-grandmother Ettel Gruber lies buried.

Tilted now to one side, her tombstone is marked with the depiction of candlesticks that traditionally denote the tombs of Jewish women. Ettel, who died in 1947, was "a positive and dedicated woman, fair and kind in all her doing," her epitaph reads. She "offered hospitality and charity to the poor and set a full table for the Tzaddikim."

Jewish cemeteries are often described as "Houses of the Living," and, even when overgrown and abandoned, lives and life stories endure here in sculpted form.

Jewish tombstone decoration combines religious and folk motifs that in many cases refer to the name, lineage, profession or personal attributes of the deceased. Numerous gravestones bear symbols referring to death, such as broken candles and broken flowers as well as the hand of God breaking the branch from a tree. But many more refer to life.

Among the more common carved symbols are two hands in the spread-fingered gesture of priestly blessing on the gravestones of a Cohen (priest), that is, a descendant of the biblical High Priest Aaron. Another common symbol is a pitcher, or ewer, marking tombs of Levites, or descendants of the ancient tribe of Levi, priestly assistants who traditionally washed the hands of the priests.

Books mark the graves of particularly learned people; hands placing coins into charity boxes denote those who were particularly generous. Candlesticks -- as on my great-grandmother's gravestone -- often mark the tombstones of women, since in Jewish ritual women bless the candles on the Sabbath. The candlesticks are sometimes simple representations; others show ornate, almost braided candelabras, and some carvings include hands blessing the flames.

The images of a variety of animals also frequently decorate the stones. Lions may symbolize the tribe of Judah or personal names, such as Lev or Leib. Carved stags indicate names such as Zvi or Hirsch. Birds often appear, and mythical beasts, such as the winged griffin, are also common. There is often, too, a wealth of other decorative carving such as flowers, vines, grapes, and geometric forms.

All this imagery, and more, is found in the Jewish cemeteries of the Bucovina region. The decorated tombstones here, in fact, represent especially striking and sometimes startling examples of artistry, design and virtuoso stone-carving.

Baroque tombstones from the 18th and 19th centuries in particular employ a richness of texture and imagery that approaches that found in the rococo decoration in some churches. In some places carving styles are so distinctive that you can discern the work of individual, now anonymous, artists.

Few Jews live in the Bucovina today; the cemeteries thus form powerful memorials to a civilization that was wiped out in the Holocaust. Moreover, the liveliness and fantasy employed by the stone-masons adds a new dimension to how we may regard the spiritual, intellectual and artistic lives of Jews who lived in traditional East European shtetls.

To me, these elaborate sculpted gravestones are just as important manifestations of faith through art as are the marvelous painted monasteries that are also found in this region. Yet few people know of their existence, and even fewer ever visit.

With this important new guidebook, Simon Geissbühler introduces these wonderful places to a broader public and opens the way for spiritual pilgrims of all faiths and beliefs to experience their power, beauty and historical significance.