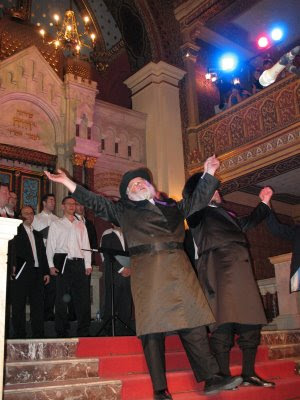 A number of Jewish culture festivals of all sorts take place around Europe in the spring and summer. Some are dedicated just to music. Others are much broader. As far as I know, there is no central web site where you can find information on all of them. I will begin to post information here on dates and venues. I ask my readers to please send me information to include!

The culture festivals and other smaller events make good destinations around which to center a trip. Some, like the annual Festival of Jewish Culture in Krakow, are huge events lasting a week or more, which draw thousands of people and offer scores or sometimes hundreds of performances, lectures, concerts, exhibits and the like. Other festivals are much less ambitious. Some are primarily workshops but also feature concerts. Many of the same artists perform at more than one festival. 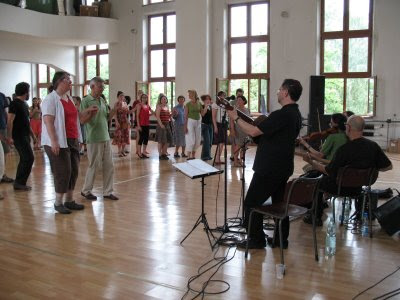 Dance workshop, Krakow, 2008. Photo (c) Ruth Ellen Gruber
A highlight this summer will be three concerts by the 14-person ensemble of The Other Europeans project on Jewish and Roma culture, music and identity. This is an EU-co-financed project of the Yiddish Summer Weimar, The Festival of Jewish Culture in Krakow and the KlezMORE Festival Vienna.

Here is a partial list, with links to web sites -- I will add to it (here or on separate posts) as information comes in:

All Over Europe -- 10th annual European Day of Jewish Culture. Sept. 6. Events take place in nearly 30 countries. The theme this year is Jewish Festivals and Traditions.

Montreal -- International Yiddish Theatre Festival -- June 17-25. Not in Europe,
but with a lot of European Jewish/Yiddish Theatres participating.

Boskovice -- Boskovice Festival 2009. July 16-19. Many types of music, performance and exhibitions, etc, aimed at supporting the restoration and promotion of the historic Jewish quarter

Krakow -- Festival of Jewish Culture, June 27-July 5. The Other Europeans concert will be July 3.

Warsaw -- Singer's Warsaw Festival of Jewish Culture, Aug. 29-Sept. 6. A big festival, increasingly similar in scope to that in Krakow.

Lodz -- Festival of the Dialogue of Four Cultures. Usually in September